What is it like to take part in research?

In these short stories, people have shared why they take part and how different research studies have helped them. Play the films and read the stories below to learn more about the experience of taking part in research with care at CPFT.

If you want to share your experiences to hep shape research, please contact Iliana Rokkou, User and Carer R&D Manager, at iliana.rokkou@cpft.nhs.uk.

Pilgrim Beart writes about why he volunteered for the PREVENT dementia study.
This study aims to identify biological markers of dementia and changes in risk factors in people many years before they would be expected to develop dementia symptoms. 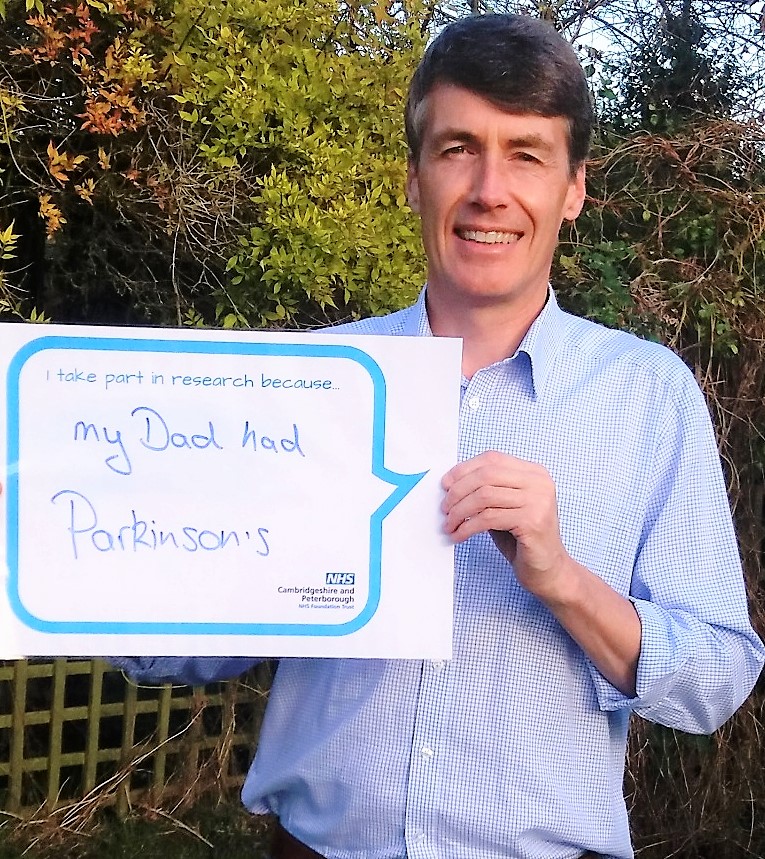 “My father was diagnosed with Parkinson's in his late fifties and died after a fifteen year journey. Dad’s ‘dementia with Lewy bodies’ diagnosis put us all in trepidation of whether ‘he’ would disappear before our eyes. In the event he never lost the essence of his being, right to the end, maintaining the same strong interest in science, the same sense of humour and the same love - it just became harder to reach him as the physical and mental effects of Parkinson's took hold. He made the analogy of a spaceship getting further and further away - if you were patient you could still communicate. The burden of course fell on my mother.

“Parkinson’s is still treated using drugs discovered in the 1960s, which lose effectiveness over time. Now it seems researchers may be close to discovering how to prevent or reverse the death of the dopamine-making cells. Scientific progress is now so fast that people diagnosed with any slow, chronic illness have a real prospect of seeing a cure arrive in time - or at least a dramatic increase in life-expectancy or treatment. Real-world trials are the slow part."

Getting Involved with PREVENT

“I got involved in PREVENT through my wife who had volunteered for a different Dementia Research study. It’s only taken a couple of days of my life - which is nothing in the big scheme of things - and if that helps to hasten progress for millions of dementia sufferers then it’s a great deal. It feels good to pay back a little to society, it was a really interesting process to go through - and the study is in effect a free comprehensive medical check as a bonus.”

Find out more about the PREVENT study here.

Having had mixed experiences of service user involvement, some of which had fallen on the tokenistic side, I was a little reticent at first to get involved in CPFT research. On balance, my experiences have been positive and work has felt collaborative, working alongside healthcare professionals as partners in the research process. Some of the ways I have been involved are:

It has been most important to me to find a positive way to be involved in helping to improve mental health services and giving other people, who use the services, an opportunity to have their views heard. Several of the projects I have been involved in have evaluated existing services. It has been rewarding to see the results of these studies fed directly back to the teams, but sometimes frustrating that it is difficult to monitor if recommendations have been taken note of for future practice. I am particularly pleased and proud to see that people’s views are captured in their own words from the transcripts of their interviews. This means the finished reports include many direct quotes to illustrate the main points raised.

There have been personal benefits to my involvement. It helped me continue to rebuild my self-confidence which was knocked by a long period of depression. Gaining new skills, working together with other service users and collaborating with professionals as part of a project team have all been part of my recovery It has given me back my belief in my own abilities.

I am not sure how I got involved in research. I think it was through Iliana, the User and Carer Research and Development Manager. I went to a training scheme to learn about the different kinds of research. This training proved invaluable when it came to reviewing a research study. I have been involved in reviewing several studies and each one has proved interesting reading. I read the research material several times and review each project under a set of objectives which makes the reviewing process easier. The completed forms are then reviewed and talked about in a meeting. The meetings bring about points that are not in the forms but are often invaluable to the research design process.

This experience has given me confidence to go on to do other things in my life. It has been inspiring to be involved at this level. I have also found that the researchers have valued my comments and I think they value input from a different perspective. I have had positive feedback from them and they have listened and responded to my comments.

Personally, I have enjoyed the training and the follow-up meetings that I have been involved with. I think the more time you spend on the research reviews the more useful your input, although a lot of the terminology is confusing. The projects normally need to be turned around fast which means you have to make a time commitment to the project.

It is good to have something to concentrate on and is inspiring at the same time. I would recommend the process to people who have the time, energy and knowledge of the subject. If you have all these attributes, it is a rewarding process.

Participating in research as a service user research reviewer has greatly increased my confidence both in the services and in myself and my ability to be heard. The reviewer role is flexible so I can do as much or as little as I need to, while keeping in the loop about what is happening with mental health research. For me, this role has been a stepping stone towards getting full-time work. Thank you so much!